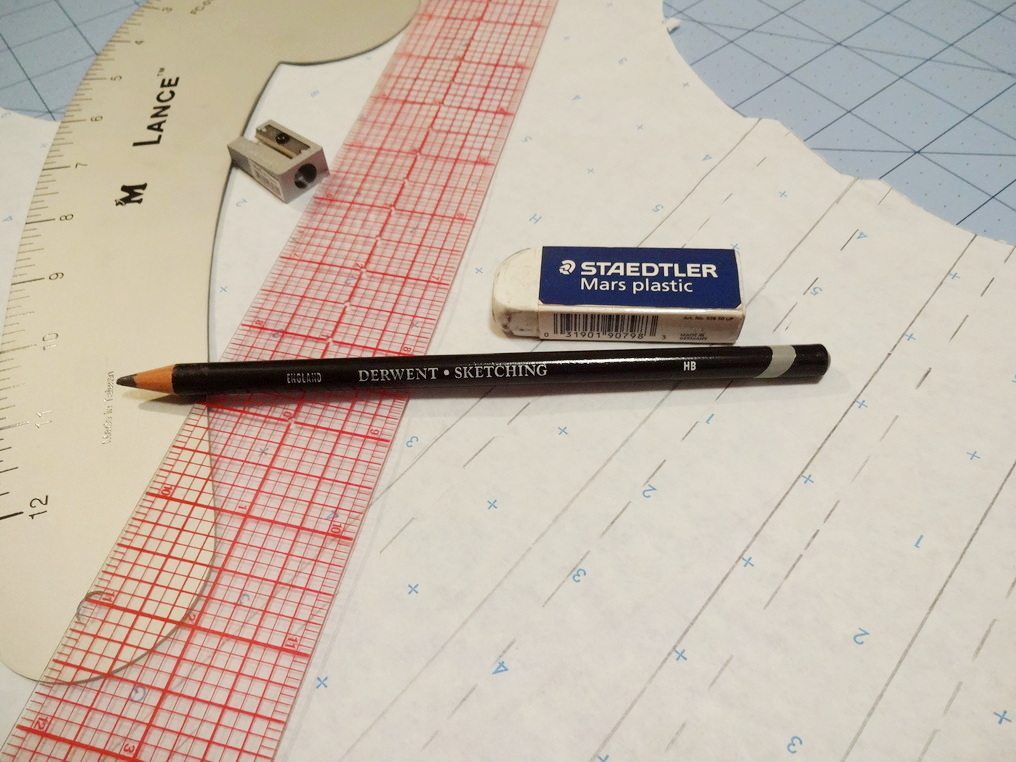 Over the past several months I’ve traced a few patterns for various garments I’ve made so I thought it would be a good time to share a few of my experiences. I’ve mostly been tracing sewing patterns from books but in once instance, I traced a PDF pattern.

I’ve mostly been using a 60″ wide roll of pattern tracing paper (10 yards for $22)  from Stonemountain & Daughter Fabrics in Berkeley (love this store!). But I also used a few yards of Swedish tracing paper that I bought online a couple years ago but never got around to using it until last year. This tracing paper is sort of like interfacing and can be sewn. However it’s more expensive than paper. I’ve also read that the paper rolls used in doctor’s exam rooms could be used as pattern paper. You can buy it medical supply stores – and it’s fairly inexpensive. I”ll have to look into that when I’m done with the roll I’m using.

I like using a drawing pencil to trace. I’ve been using a Derwent sketch pencil from an art supply store — grade HB. Drawing pencils are graded by H (hardness) and B (blackness) — 9H is the hardest and 9B the darkest.  An HB is right in the middle of the range.

If you use a pencil that is too soft, your line will likely smudge and your pencil would get dull pretty quickly. You need a precise line for pattern tracing. For example, if you used a 5B pencil, you’d have a nice dark line but you’d have to sharpen it constantly.

You could use a 1H or harder pencil but I personally don’t like the feel of H pencils. B pencils are great for drawing, the higher the number the blacker the pencil.

My favorite eraser is this white Mars plastic eraser by Staedtler. It erases very cleanly and gently. You don’t have to worry about leaving ugly smudges or tearing anything when you use this eraser. The company also makes a great metal pencil sharpener – the blade never seems to dull. It’s just the sharpener – it doesn’t come with a container to catch the shavings.

Here are some things to keep in mind:

Soon I’ll be writing another post on the different patterns I’ve traced. I was going to include that here but it was getting too long so I decided to break it up.

In the meantime, please share what your favorite pattern tracing tools are.