Hi, as some of you may know, I’m the organizer of the Bay Area Sewists Meetup group. Since 2014, I’ve planned and organized monthly meetups for people who enjoy sewing. Along the way, I’ve met many wonderful people who are part of a vibrant sewing community in the Bay Area.

I’ve also developed relationships with local businesses that offer our members discounts on sewing studio memberships (Hello Stitch in Berkeley and Sips N Sews in San Francisco), discounts at their fabric stores (Stonemountain & Daughter Fabrics on our Berkeley meetups days and Britex Fabrics when we meet there) or discounts on classes and merchandise (The Sewing Room in Alameda). They have also donated raffle prizes to our annual Frocktails in February event. 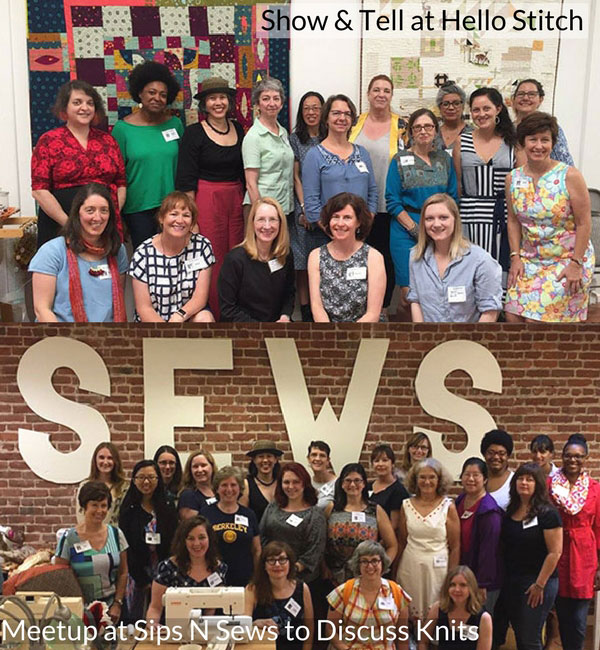 Bay Area Sewists members range in expertise from beginning sewists to expert costumers and sewing instructors, such as Beth Galvin who blogs at SunnyGal Studios and teaches at Hello Stitch and Jennifer Serr who teaches apparel sewing to kids and adults at The Sewing Room. We’ve had meetups for fabric and pattern swaps, sewing workshops, fitting meetups, frocktails and indigo dyeing.

Bay Area Sewists members have also offered sewing books, sewing magazines, new sewing patterns, and thread catchers to give away. They have also been a great resource for ideas for future meetups. People in the sewing community are generous and genuinely helpful. 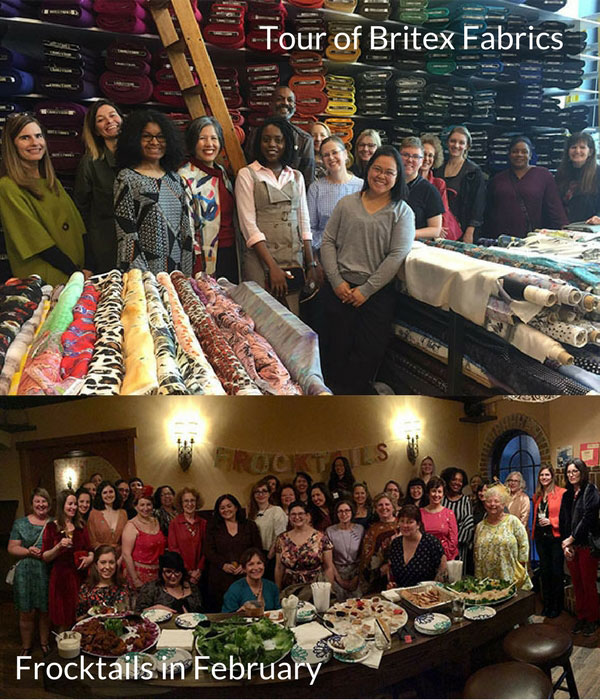 Bay Area Sewists started in 2012 by Meg of Made by Meg. She stepped down at the end of 2013 and I volunteered to be the next organizer. You can read my 2014 blog post about the first Bay Area Sewists meetup I organized – a pattern swap. (You can see our past meetups here.) 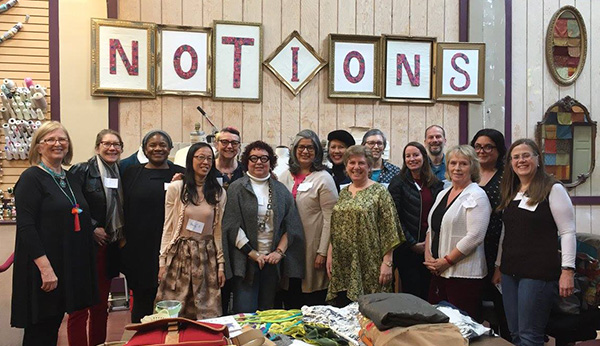 I love meeting people who sew. And we do have a couple of male members. In the above photo, see if you can spot Michael, who blogs at Line of Selvage (in the back row under the “NS” of Notions).

If you are ever in the Bay Area and would like to attend one of our sewing meetups, please let me know. Most of our meetups are free to attend. I like to think of the sewing community as a global community.

Since February 2014, I’ve organized more than 40 meetups. Apparently, Meetup noticed that we consistently meet and people show up. In March 2018 I got an email from Meetup inviting me to attend the first annual Meetup Togetherfest in New York! Here’s part of that email: 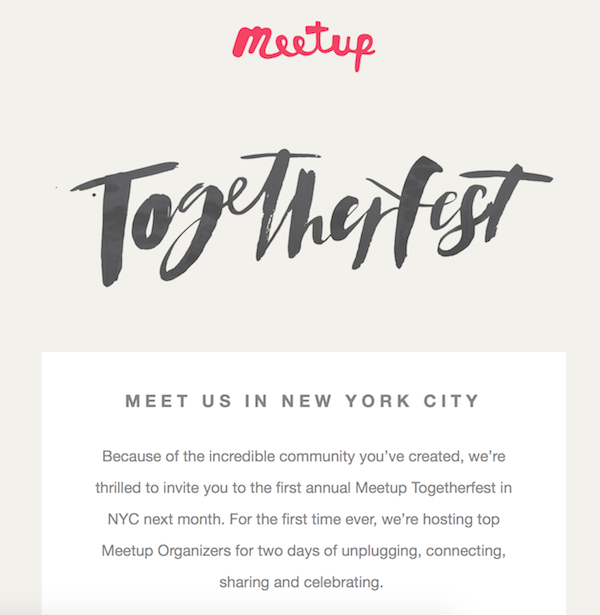 I was so very surprised and deeply honored to get the invitation. The email also said: “There are over 230,000 Meetup Organizers around the world, but this year we only have space for 150.”

Wow. Who knew there were so many organizers?!

Meetup paid for a two-night stay in New York – Thursday and Friday, April 19 and 20 – we just had to make our way to the Big Apple. Here’s Meetup’s brief Medium blog post about Togetherfest. It was wonderful to meet organizers from around the world. I met people from Berlin, Brisbane, Delhi, Dublin, London, Melbourne, Sydney, Toronto and from all over the United States – Arizona, California, Colorado, Illinois, Maryland, Massachusetts, Michigan, New Jersey, New York, North Carolina, Ohio, Texas, etc.

When I explained to people that I was the organizer for the Bay Area Sewists, I realized that people weren’t familiar with the word “sewist.” So I usually added, “people who like to sew.” Then people seemed to think that we got together with our sewing machines at every meetup. I explained that we didn’t sew at every meetup but the events usually focused on some aspect of sewing apparel (fabric, patterns, sewing techniques). 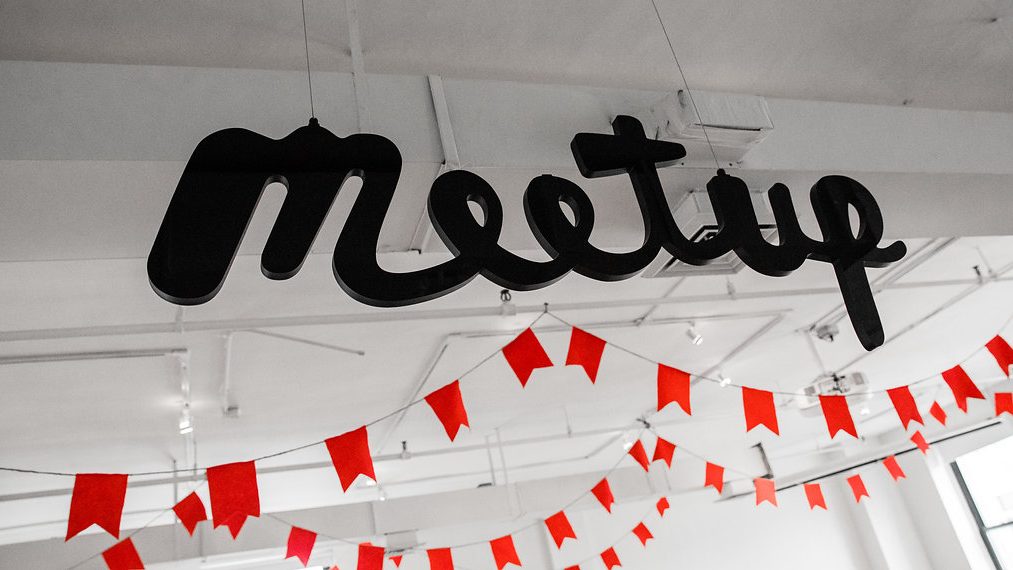 On our first day, we got a tour of Meetup Headquarters, with Meetup folks telling us about what they did in their various departments. They had photographers documenting the event so we didn’t have to. 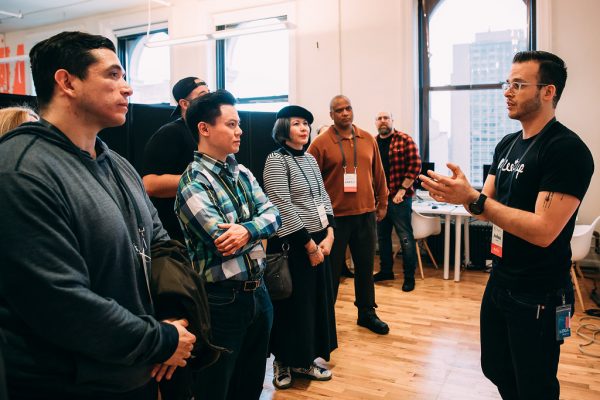 They also asked us to take post-its and write one positive thing about our Meetup experience as organizers and one pain point. Here I am writing about my problem with members not being able to rejoin the group after their membership expires. 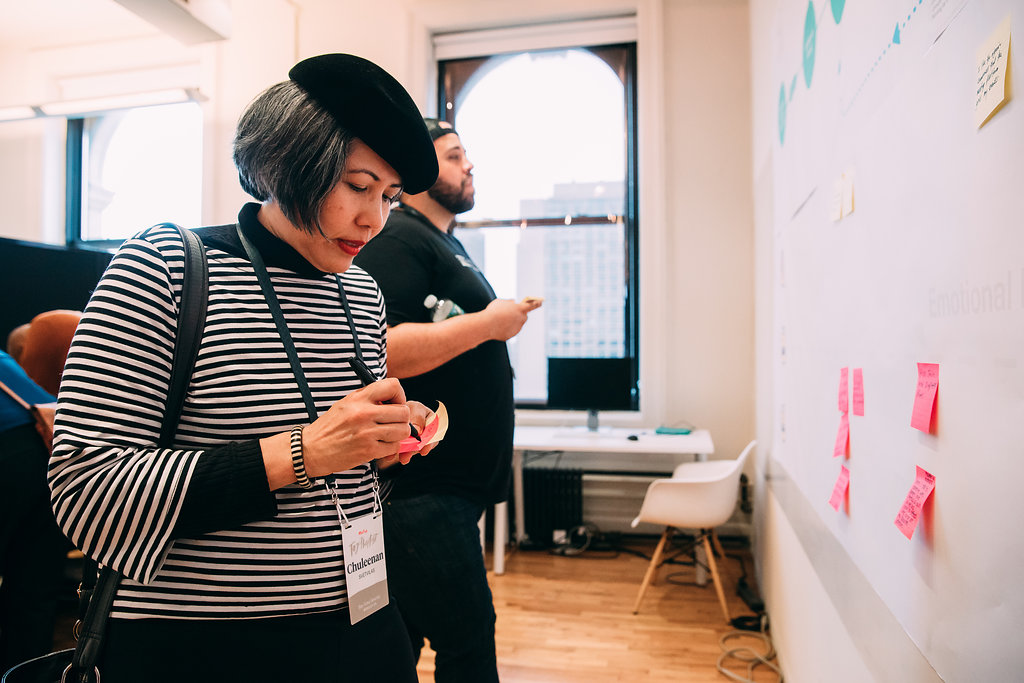 We also spent part of the afternoon in small groups, with each group trying to solve a riddle – fun but really cold. My group was outdoors most of the time, going to various locations, where we were to find an actor playing a role and ask him or her questions. It was in the 40s, chilly and windy. Here we are downtown in the financial district. I’m wearing my teal Sapporo Coat but I was still cold. I didn’t bring enough layers. 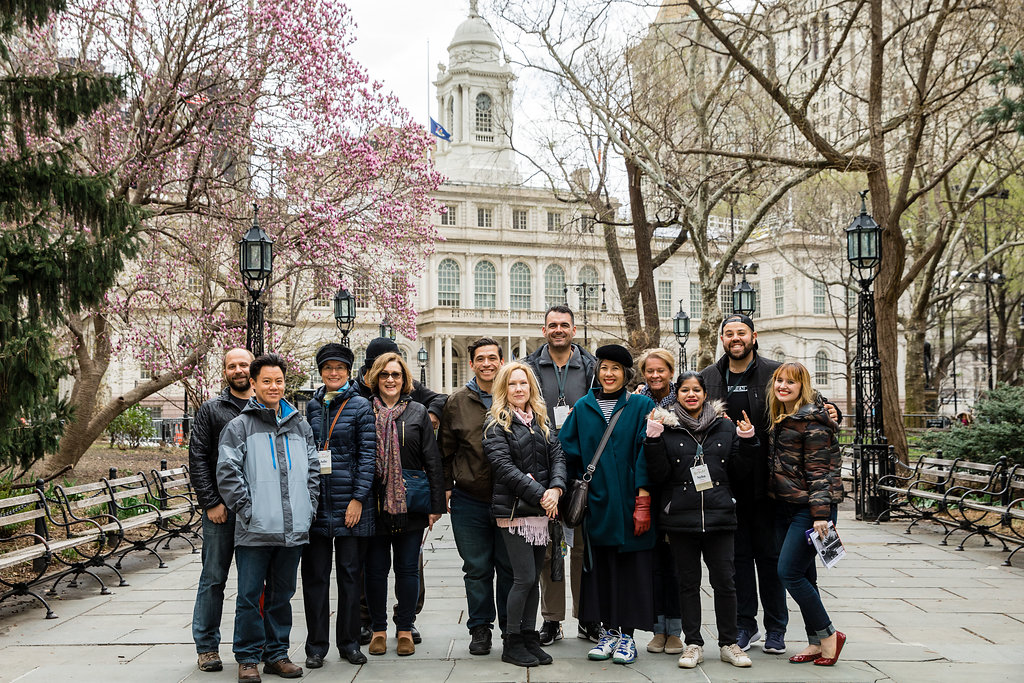 When we got back to Meetup HQ, we had dozens of New York pizzas waiting for us. I gorged on the pizza. Here are just a few of the pizza pies they served us. Yum! 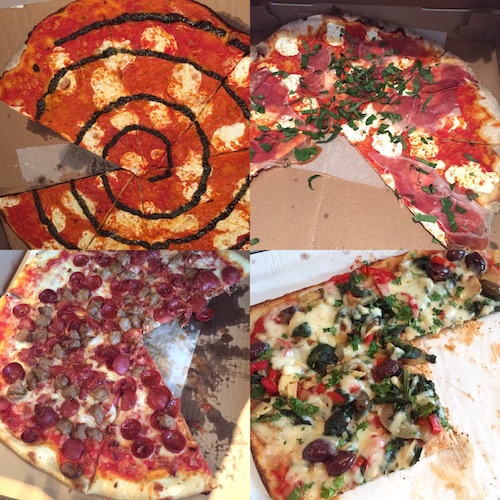 What was the point of this two-day event? Well, according to the booklet in our swag bag, Scott Heiferman, the co-founder and CEO of Meetup, he had the idea of holding a “global gathering of great Meetup organizers for a long time.” He wanted to give us the opportunity to share our stories and to “be inspired by others’ Meetup stories.”

I was certainly inspired by other Meetup organizers. I met organizers of groups focused on hiking, writing, photography walks, programming, dads in the city, real estate, you name it. I didn’t meet any other sewing Meetup organizers so I guess I was it. 😉

Some Meetup organizers meet weekly or even more than once a week! I was pretty amazed that some groups met so often but those were often large groups (thousands of members) with multiple organizers so they took turns organizing various events. I met the organizer for Fierce Friends of Phoenix, an LGBTQ group, that has become a nonprofit organization.

I admit I was felt a little insecure comparing the size of Bay Area Sewists (less than 150 members) to groups boasting 8,000+ members. I wondered if the size of a group affected the algorithm. (Yes, Meetup uses an algorithm that picks which meetups to feature in your local area.) Luckily, I was able to buttonhole Meetup’s Chief Operating Officer and ask her if that was a factor. She said, no, what’s more important is that you meet regularly and that people show up. And, in fact, some of the smaller groups are more successful than the very large groups.

I met people who organize multiple groups, like DeRM from the Bronx (pictured below), who runs a Taco Night Meetup in NY and co-organizes three other meetups – MMA in NYC, Foolinary Culinary and the New York City Organizers group. 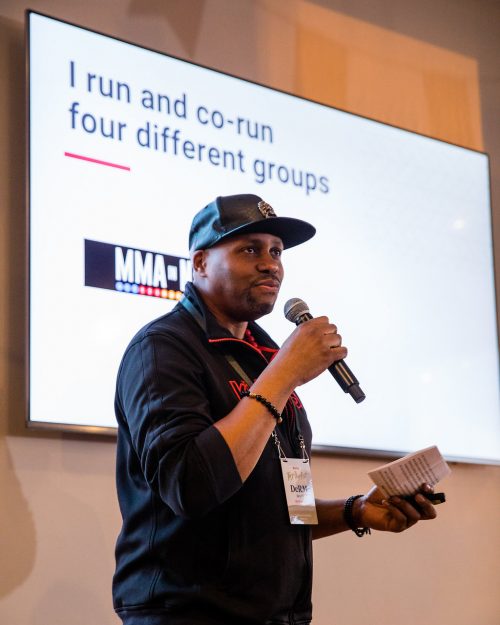 Throughout the event, in between sessions about Meetup features and hearing from the Meetup and WeWork CEOs (WeWork acquired Meetup last fall), we got to hear from individual organizers about their Meetups. Some had moving stories to tell about how their group had an impact on people’s lives, how they gave back to their local communities or their group grew from one chapter to many chapters throughout the country.

The second day we spent at Industria, an event space in the West Village. It had a large open space and smaller rooms for breakout sessions about everything from using the apps and Meetup Pro to hosting at WeWork and making the website work. We had to pick two sessions we wanted to attend. I learned that Meetup Pro starts at $30/month and seems aimed more at people whose Meetup group is a business for them. At the website session, I also got a chance to tell the Chief Operating Officer about the problems people rejoining the Bay Area Sewists group after Meetup’s redesign. Apparently, the redesign was focused on the member user experience, not the organizer’s user experience. They are working on making it a better experience for organizers.

One of the last sessions involved all the organizers in the room and Priya Parker (seated in the center chair below), who led a thoughtful discussion about the process of gathering, what happens at the beginning middle and end of a meetup. 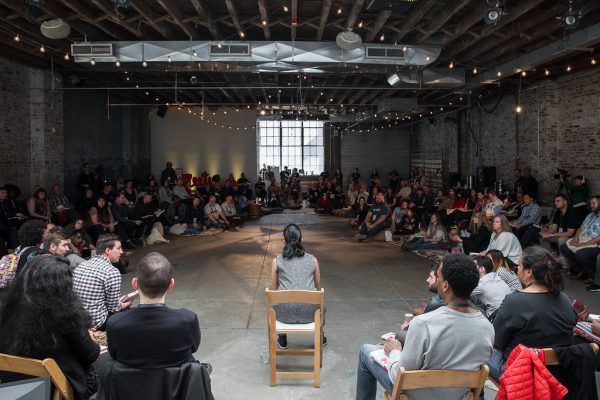 Here’s Priya signing copies of her book, The Art of Gathering: How We Meet and Why It Matters (Amazon affiliate link). Meetup got copies for all the attendees. Thank you, Meetup! 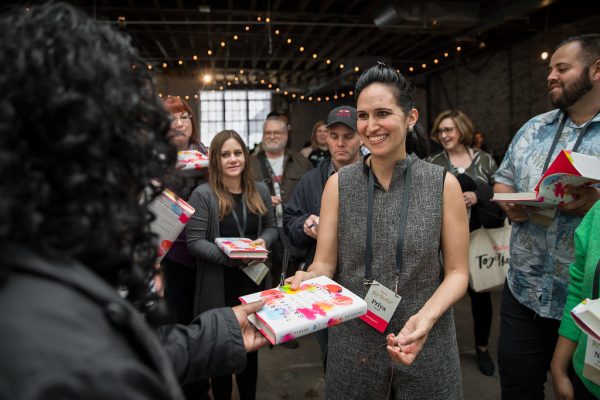 I’m still processing the experience and figuring out what I’d like to incorporate into the Bay Area Sewists Meetups. Our group is small because I charge annual dues, which means that after the three-month trial period, you either have to pay the dues ($15/year) or Meetup automatically removes you from the group. This means that only people who are genuinely interested in attending a meetup remain in the group. I like our small size – small but mighty.

Thank you Meetup for a great experience and thank you Bay Area Sewists members for coming to the meetups, building a sewing community, sharing ideas and inspiring me to keep organizing!

12 thoughts on “Building a Sewing Community and Meetup Togetherfest”