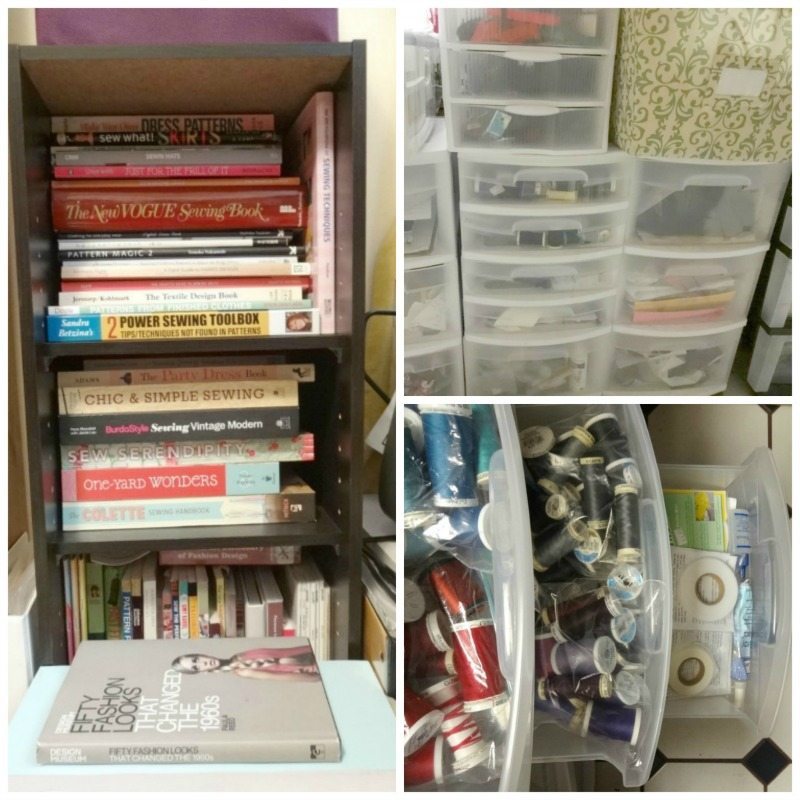 I didn’t participate in Bimble & Pimple’s Sewvember Challenge – post a sewing photo every day in November – but after seeing all the photos on Instagram (#bpSewvember), I was inspired to organize my notions, fabric, and related books. (Plus I had the additional incentive of the hubster was complaining (a lot) about the fabric: “It’s everywhere! You have to do something!”)

OK, I admit there were about a couple of fabric piles in the bedroom – sitting on top of some large clear plastic tubs, which were full of fabric, my notions were also crowded in couple of small carts, and my patterns needed some organization. It was starting to get messy but really, it wasn’t as bad as the hubby made it seem. The challenge was how to find more space in our cramped apartment. And that’s partly why I procrastinated doing anything.

I don’t have a sewing room (if only!) and nearly all of the wall space was already taken up by bookshelves. The hubster is an avid reader and book collector. His books fill more than a dozen bookcases (really!). I have a few bookshelves, too but nowhere near as many as he does. So I decided I needed the following:

I searched “shevling unit” on Ikea‘s website a few times, trying to find something that didn’t cost too much, wasn’t too wide, and didn’t necessarily need a wall to rest against. The website can be a bit overwhelming – too many search  results – so I popped over to the store in Emeryville to see what some of them look like in person and decided to get the Vittsjo shelving unit ($49), which has four shelves with a lot of space between the shelves. I thought they would be good for storing containers of fabric and other stuff. It looks like this after you put it together (yes, like most Ikea furniture, assembly required.) 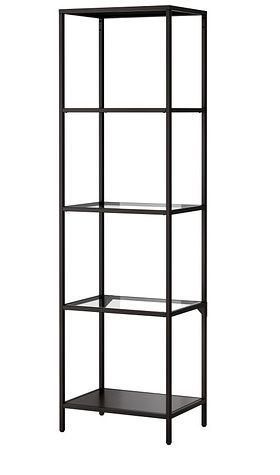 It was freestanding on Ikea’s floor display but it does come with something to attach to the wall at the top. Maybe I’ll use some bungee cords to attach it to the desk. I wouldn’t want it to topple over in an earthquake.

It’s nearly 69 (175 cm) inches tall with metal supports and three glass shelves in the middle, the top and bottom shelves are wood. As you can see, it’s not very wide (about 20 inches/51 cm) or deep (14 inches/36 cm), which was exactly what I needed. It had to squeeze in next to my desk in the bedroom and not block the television.

Here’s a shot of it in the bedroom, right next to the bed. You can’t see my desk because it’s right behind the Vittsjo shelves. My back was against another bookshelf behind me so this is as far back as I could get to shoot it. You can’t see the bottom shelf.

The two larger clear bins (fabric inside!) that you see on the two middle shelves are the deep sweater box from the Container store (dimensions: 15 5/8″ x 13 1/8″ x 13 1/4″ h).  These boxes aren’t very wide but you can fit a lot in them if you neatly fold your fabric. My larger bins of fabric are on the other side of the bed.

I discovered that I could fit several of my smaller plastic containers next to the fabric boxes. This is the side view. 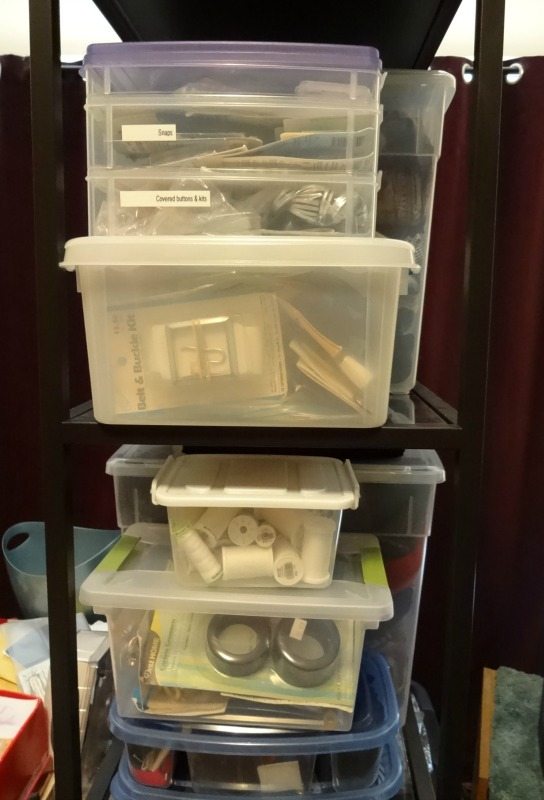 Some of my notions are in the small plastic boxes, which had formerly been piled on top of my rolling carts in the dining area. 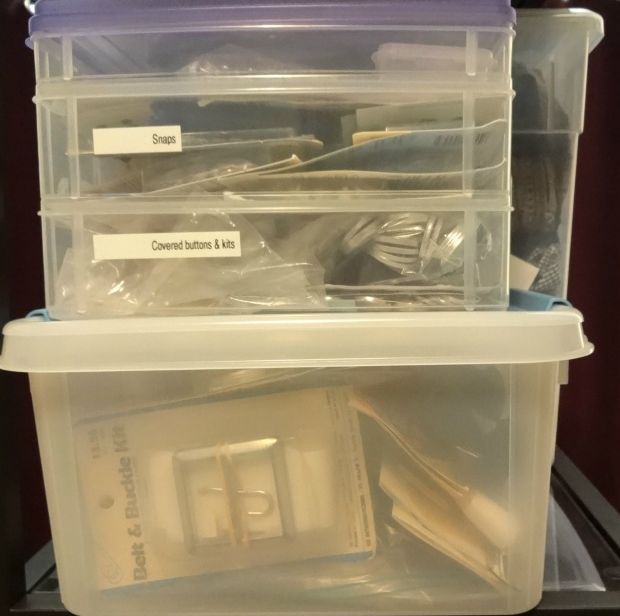 It’s nice to have them out of the way.

Next, I wandered around Target to see what they had and found what they call a small three-shelf organizer – really a small, skinny, cheaply made bookcase ($21.49, assembly required). Part of Target’s “Room Essentials” line of products, it’s made out of that heavy pressed board stuff, except for the back, which is actually a flimsy piece of black cardboard(!). I got it because it fit in the space – on top of a small chest near another bookcase and left enough room to put another stack of books in front of it.

I got a purple fabric bin ($6) at Target, which sits on top of this skinny bookcase. The bins are also part of the Room Essentials line; they fit inside of various shelving units. I put sewing magazines and more books in it. They are made of polypropylene textile, which is a very lightweight, nonwoven fabric. (A lot of promotional tote bags are made from this fabric.) 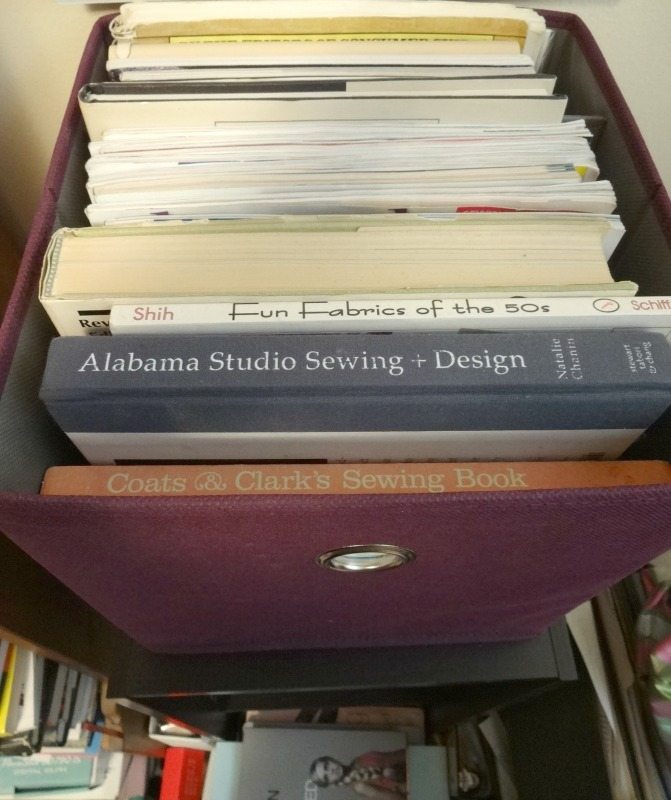 Moving onto our dining area of the apartment where I have a row of small Sterilite rolling carts. I  already had two and I needed another three-drawer one, which I got at Target for $12.99. It’s the one on the left, which is now full of fabric and project stuff. 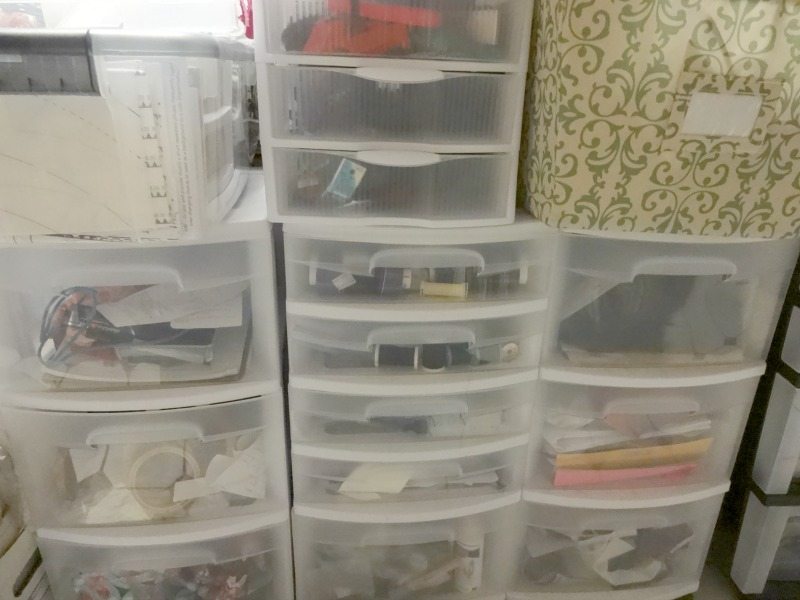 These carts are lined up against our dining room table, which is essentially my sewing table. We don’t eat there. 😉

I’ve got three short carts, including one 5-drawer one. which has thread in zip lock bags, fusible bias stay tape, fray check, and other notions in the shallow drawers and fabric paint, glue and other things in the deep bottom drawer. 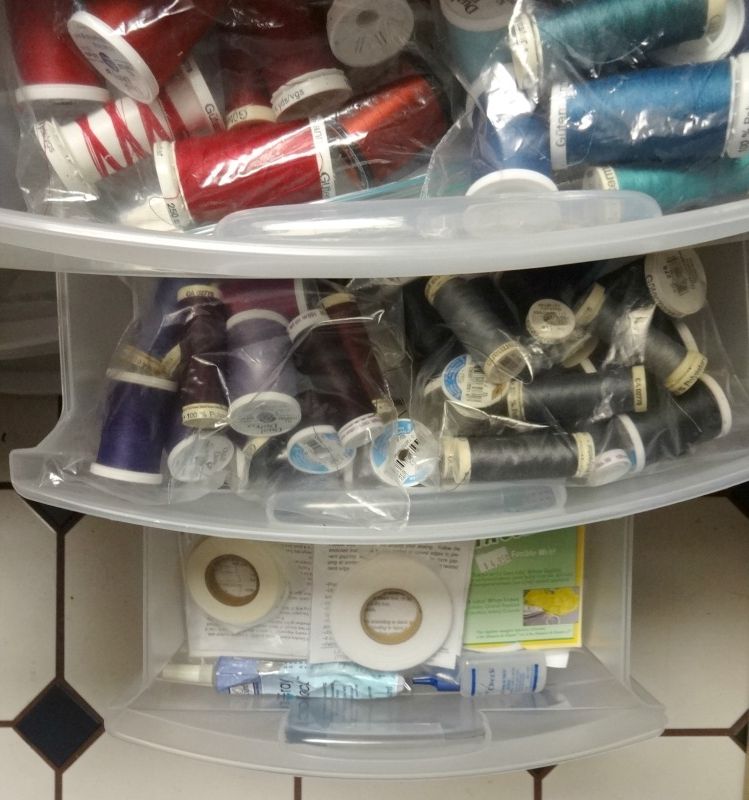 On top of this cart, I’ve put this three-drawer organizer ($8.99), which I also got at Target that day. I’ve got bias tape and seam tape in the top drawer and zippers in the other two. 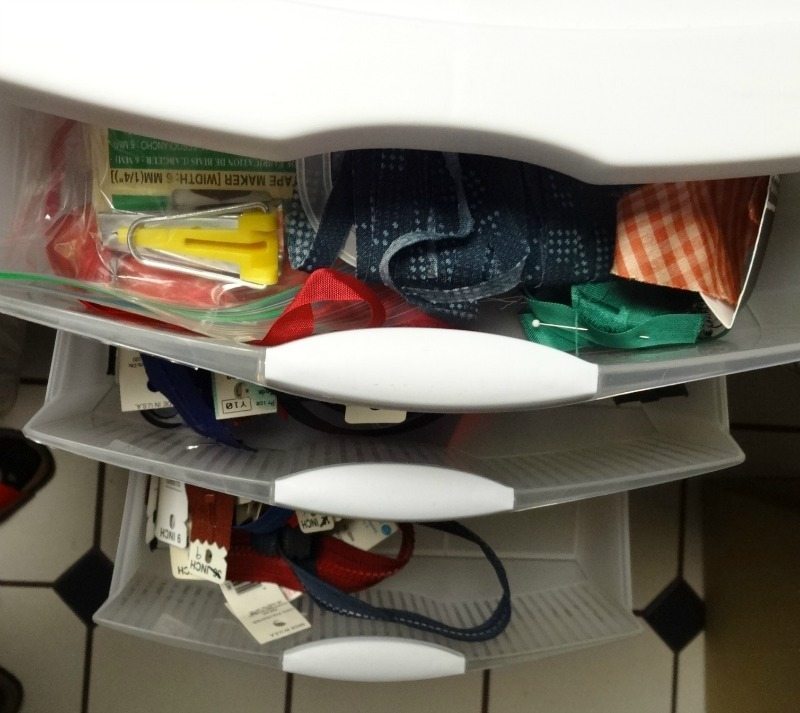 On top of the three-drawer cart on the right, I’ve put a fabric file box I got on sale at the Container store earlier this year. I put several sewing patterns (vintage, indie patterns, patterns I’ve traced, and tracing paper) in it.

To the right of my small carts, you can see a tall, 8-drawer storage cart, which I got for $57 last year from Office Depot. At the time, it was cheaper than other multi-drawer carts I saw. I like it because the bottom two drawers are deep and the rest are shallow. This cart is now $74.89.

Here’s a closer shot of it. As you can see, it leans slightly to the left. I don’t know why it’s doing that. I moved some of the heavier stuff to the bottom drawer to see if that would make a difference but no. Oh, well, it still does a good job storing stuff. 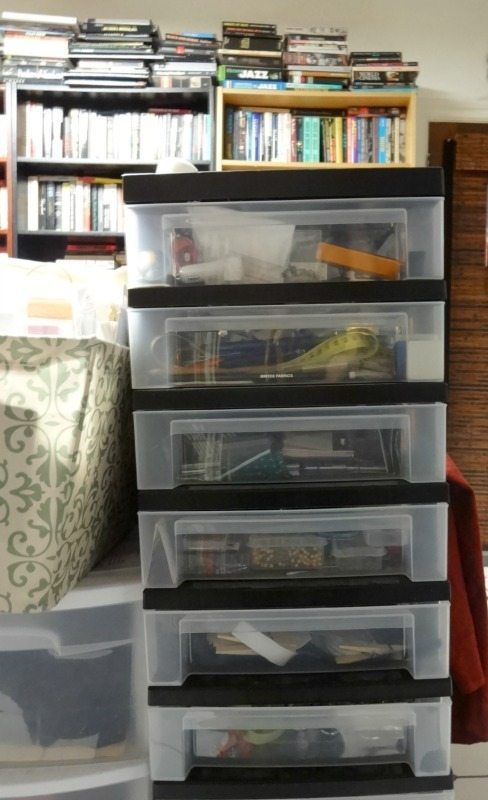 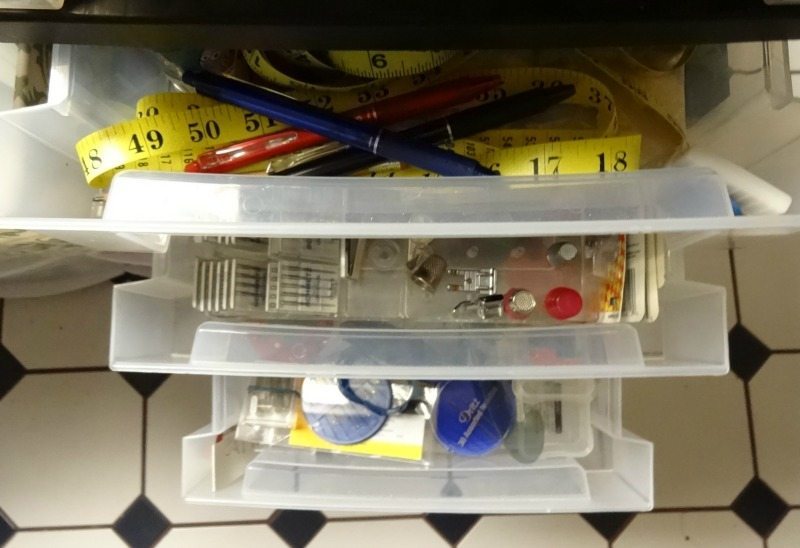 And that’s my current sewing organization. Now I feel ready for sewing in the New Year. How do you store and organize your sewing stuff?