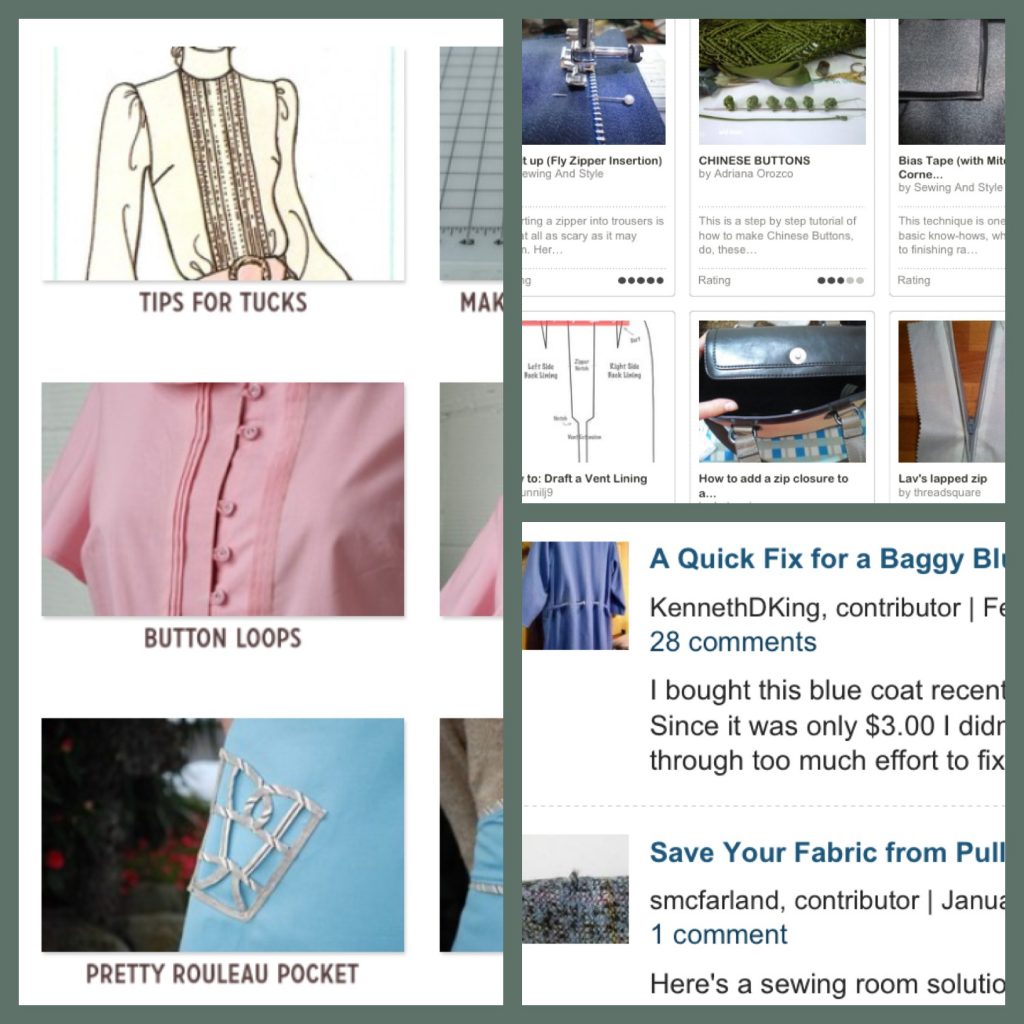 When I made a dress from BurdaStyle Sewing Vintage Modern, I added my own adjustment to the pattern, such as lining the bodice of the dress. Though I had made a couple lined vests for my husband and lined a jacket, I hadn’t lined the bodice of a dress before. It had seemed like a simple thing but when I began to put the lining and fashion fabric together, I got confused. It was late at night so I couldn’t stop by my local fabric store for advice. Naturally I turned on my laptop and began my search for sewing advice.

I typed “how to line a dress” in Google and got a tutorial on How to Line a Sleeveless Dress on Blithe Stitches. This post had helpful photos and clear step-by-step instructions so I could easily figure it out.

The web is a great resource for sewing advice. Many sewing enthusiasts, designers, publications, and companies have sewing tutorials on their blogs and websites. So if you ever get stuck on something, fire up your computer and start your search. You’ll be amazed at the plethora of instructions, both written and video, out there.

A few of my go-to places for instructions and tips (in no particular order) are:

Colette Patterns Tutorials — Sarai Mittnick, Colette Patterns founder and designer, author of The Colette Sewing Handbook, covers a variety of topics, ranging from working with fabric to fitting and adjustments. She has a nice explanation on installing invisible zippers.

BurdaStyle’s Techniques section — If you click on “Resources” on the home page, you’ll see a wide array of sewing techniques and tips posted by BurdaStyle, members, Burda Style magazine, and others, including advice for beginners.

Threads Magazine‘s “How To” pages include everything from garment fitting to sewing techniques but some content isn’t accessible unless you are a “Threads Insider.”  To view those tips you need to join ($32.95/year for online membership or $12.95 for print subscribers).

Where do you get your online sewing tips?

I knew that if I wanted to enter the BurdaStyle Sewing Vintage Modern contest, it would be a good idea to find someone to photograph my dress. My husband has taken pictures of me wearing various hats or outfits but what usually happens is that I get impatient with posing, he gets impatient with taking photos (“OK, is that enough?”), and then we don’t get all the shots I really need. Plus he gets annoyed at my digital camera, which is too small for his hands (hubby is a big guy – 6′ 3″). So here’s what I learned about finding a photographer to shoot your outfit.

Search engines can be very helpful. I searched “fashion photographer San Francisco” and sent emails to about a dozen local photographers. Though I knew I couldn’t pay someone to photograph me, I could offer a trade, a hand-sewn top or something else, such as a custom-made tote bag. Because most of my experience is sewing women’s clothes so I mostly contacted women photographers. For the male photographers I offered to make a tote bag or something for a woman friend.

I began my search around the last week of January so I was cutting it a bit close. At that point, I had picked out my fabric but I hadn’t done any sewing yet. Photos needed to be uploaded to my BurdaStyle project page by February 15. So my time was running short, in my emails I told the photographers that I wanted to do the photo shoot sometime between Februrary 5 and 14 and that I could come to their studio or we could shoot outside, whatever was easiest for them.

I also mentioned that they would retain ownership of the photos and that all I wanted was digital files to post on BurdaStyle and on my blog. I also said that I would write about the photographer in my blog.

I got responses from most of the people I emailed. One was interested but sick and wasn’t sure she’d be well enough in time to do the photo shoot, another was going to be out of town during my dates, a few photographers said they couldn’t do it for trade because that was how they made their living. One photographer told me that her rate was $400/hour (yeah, way outta my nonexistent budget!). And the rest just didn’t respond.

After a few days, I realized I needed to explore another option — asking people I knew if they knew any photographers who might be willing to shoot for trade. I sent emails to a couple likely friends and here’s where I got lucky.

One lovely friend of mine works on a community newspaper and she passed along the contact information for a couple photographers, one female and one male. I emailed the woman first and later that day she told me she was interested! She told me she was available on the morning of February 9 and that we could shoot in San Francisco, perhaps among the trees in the Presidio, which was near her home.

That photographer was Susie Biehler, who’s a fine art photographer and shoots these really striking photographs of water and nature. (Check out her beautiful work here.) She wasn’t a fashion photographer but she told me that she’d done some fashion shots and new store openings for the community newspaper. I figured that she knew plenty about light and she was willing to do it in exchange for a hand-sewn top, so of course, I hired her.

The week of the photo shoot, she suggested that we shoot at the Palace of Fine Arts, a beautiful San Francisco landmark that was made famous by Alfred Hitchcock in the film Vertigo. The photo on this page is an outtake. Tomorrow I’ll be posting about the photo shoot.

In December I bought the book BurdaStyle Sewing Vintage Modern at a sewing event at Britex Fabrics and I had also interviewed the author, Jamie Lau. Naturally, I had to make something from the book! And when BurdaStyle announced a sewing contest using a pattern from the book, I had some incentive to get going. But first I had to think about what to make and wrote here about my initial criteria and what I was considering. After I looked over the fabric in my stash, I knew that making a dress from the book would be my best option.

At first I thought I would use the pattern for the Jamie Shift Dress because I had some great wool crepe that I could color block. But it would have taken me a lot more time (and muslins!) to adjust the pattern so it would be more flattering to my curvy figure.

So I finally decided to use the master pattern for the Elizabeth Gathered-Waist Dress. It’s from the chapter that features fashions from the 1950s, an era when dresses had full skirts and women wore crinolines.

This pattern has a square neckline but I decided to give it more of a boat neck, which is a style I really like. That neckline always makes me think of Audrey Hepburn and the dress she wore in the 1957 film Funny Face, which also stars Fred Astaire who plays a fashion photographer.

I made one muslin of the bodice but once I tried it on I realized I made it too wide. It didn’t look right and my bra straps showed. So I traced out another pattern but only made it about an inch wider than the Jamie neckline — much better!

My other adjustment to the bodice was that I decided to line it. The pattern uses facings. So using my muslin, I cut out the bodice twice – once from my fashion fabric, which I got from Discount Fabrics in San Francisco, and a second time from my lining fabric (a lovely Bemberg rayon lining from Britex).

I pinned and sewed the front and back darts on all the pieces and then I pinned the neck and armhole facings to my lining front and back. My fashion fabric has a soft hand and I wanted it to give it a little more stiffness around the sleeves. I used a very lightweight interfacing on the facings.

Next I attached front and back at the shoulders of the lining version and the fashion fabric. To put the two pieces together, I followed the clear instructions in the tutorial “How to Line a Sleeveless Dress,” which I found on the blog Blithe Stitches. Though my dress wasn’t exactly sleeveless and it also had a side zipper, the directions still worked for me.

Tomorrow I’ll be writing more about how I finished lining the bodice, dealing with the side invisible zipper, and additional construction details.

In the meantime, you can see more photos of the dress on my BurdaStyle project page and you can vote for my dress here. My  dress is one of 20 finalists in the contest! So please check out the contest entries and if you’re a member you can cast your vote. It’s free to join!