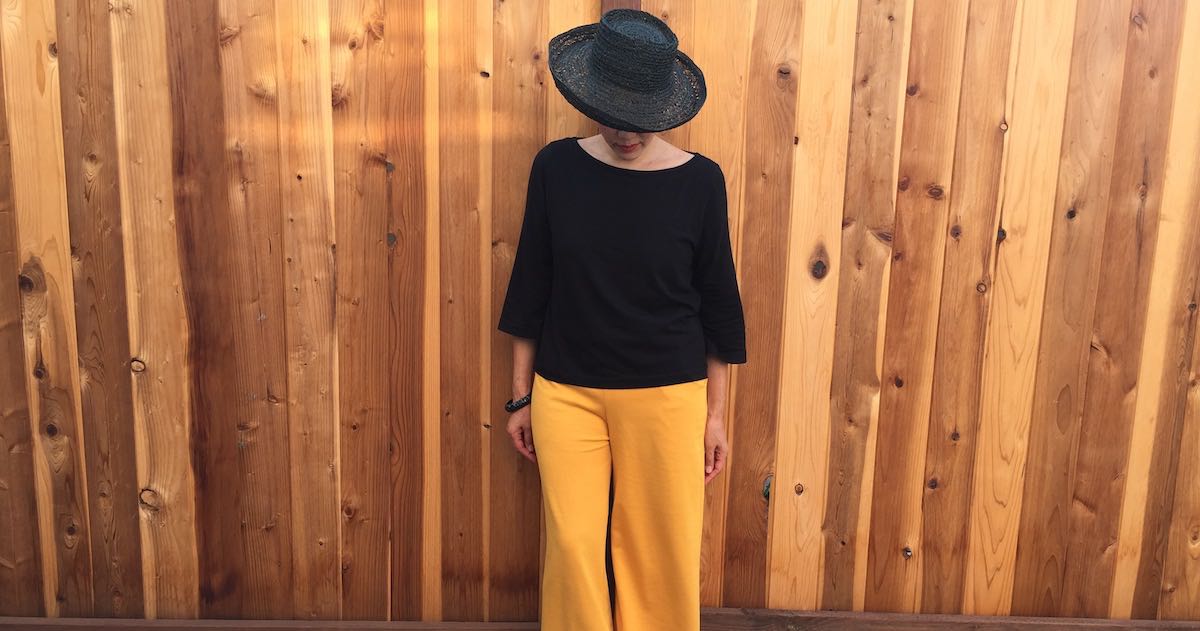 Earlier this year (before the pandemic hit the United States), I made a pair of Joan Trousers by the Friday Pattern Company in a black poly ponte. They were very comfy but because they were poly, they can get warm — and a bit sweaty. Even so, I wore them a lot because they were indeed like wearing pajamas. When I got the black ponte from Fabric.com, I also bought some yellow ponte. The black was essentially my toile (mockup version).

I picked yellow because I wanted to add more color to my wardrobe and I don’t have any yellow. It’s a color I’ve always thought I should avoid because of the yellow undertones to my skin. But I was inspired by seeing other folks on IG wearing yellow pants and hey, the model on the Joan Trousers pattern was wearing an orange-yellow version of the pants.

I sewed my yellow Joan Trousers using a shallow zig zag stitch on my sewing machine. When I was nearly done and tried them on, I realized I needed more ease. Whoops! I could see panty lines — rather obvious in yellow. Black hides wrinkles and blends them in the shadows. 😉

What happened? Well, it turns out that the yellow ponte wasn’t exactly the same weight as the black ponte. I assumed they were the same because on Fabric.com’s site called both by the same name —Fabric Merchants Ponte de Roma Stretch. Wouldn’t you think that fabric’s using the same name but different colors were the same? Apparently not and this somehow affected how they fit. The black ponte was 8 oz/square yard. The yellow ponte was 6.3 oz/square yard. [Update: There was also another issue, which you can read about below in the pattern adjustment section.]

So I ripped out the outer side seams and reduced the seam allowance from 5/8″ to 1/2″. I left the inseam as is. Still, these pants could use a tad more ease. Unfortunately, I had already trimmed down the side seams with my pinking shears. Maybe the fit will give me incentive to get a little more in shape. One of the reasons why I picked the Joan Trousers was that they were designed for a knit fabric so they could be somewhat forgiving.

The waistband is one long rectangle and the narrow elastic along the top. When I made the black version, I didn’t like the way the center overlapping waistband looked. The top corners didn’t lay flat and they pulled away from each other because of 3/8″ (1 cm) elastic that runs along the top of the overlapping waistband ends. You sew on a button where the ends overlap (see the button on the pattern’s cover photo above).

For my yellow ponte version, I decided to get rid of the button and the overlapping part of the waistband. I cut off the seam allowance from the waistband to dispense with the overlapping part and placed the waistband seam on the side. But the Joan Trousers in this yellow ponte didn’t look very flattering at the waist so I’m hiding it with this top (pattern from She Wears the Pants by Yuko Takada (affiliate link); I’ve made this top a few times, see more versions of the top).

Instead of topstitching the hem, I handsewed the hem. I don’t know if I like the way that looks in this fabric. The stitches aren’t as “invisible” as I’d like them to be. And there’s something off about the fit in the crotch of this version, likely needs more ease. When my hubby saw them, he said, they looked strange.

Update: I wore my black Joan Trousers a few days after this post and realized that the difference between the two versions was that I had added about 1 cm to the waist of the black ones. I added that ease to see if I could avoid that pulling of the corners where the front overlapped. The result was that the waist was actually a little too big and they hung low a little on my hips. But they were more comfortable in the crotch. So if I make them again, I need to add a little length to the rise (the distance from the crotch seam to the waist).

I do like the happy yellow color but the fabric didn’t quite work but I think I’ll still wear them.

My hair is long enough to put into a ponytail! I haven’t had my hair cut since February. I think I will get it cut later this month. It hasn’t been this long in years and it’s really annoying. The positivity rate has dropped to less than 2 percent at the moment so I’m hoping that it’s safe to get my haircut.