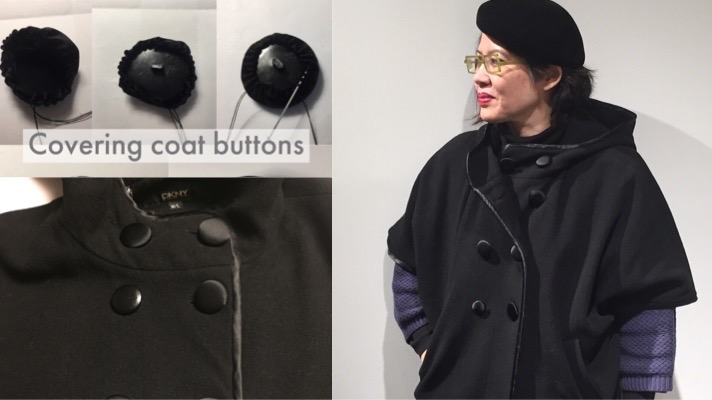 I’ve had this DKNY coat for several years. When I bought it, the raw edges were trimmed with pleather as were the buttons. After a few years, the pleather bias tape began peeling. I still liked the coat so I removed all the bias trim and replaced it with premade black bias tape I found at Stonemountain & Daughter Fabrics in Berkeley. It was a synthetic fabric that had a sheen to it that make it somewhat similar to the pleather – and hopefully would last a bit longer. That was my first go at refreshing an old coat.

A few years later, the pleather on the buttons was peeling and looked rather unsightly. So it was time for another refresh – this time it would be the buttons. Nearly all of themlooked like this:

I bought a 1/4 yard of some very nice Italian polyester from Britex Fabrics. I thought I could pry apart the buttons and replace the pleather.

But they were custom buttons with a plastic backing. I couldn’t pry them apart without damaging the back. I used pliers and tried to coax the pieces apart but they wouldn’t budge. Darn.

So I opted to cover the original buttons the old-fahsioned way. I cut circles of fabric, hemmed the raw edges by hand and then sewed a gathering stitch. I placed the button in the center of my circle, pulled the threads tight and then stitched around the gathering to ensure that it stayed in place.

I’m happy with the way they turned out. It took a couple nights in front of the television to finish. I should also mention that for my first button cover, I cut too large of a circle of fabric. After I gathered the fabrics, the gathering was too close to the button shank. I didn’t have enough room to maneuver my needle to sew the button on.

As you can see below, the button at the botton has too much fabric; the one on top was made with a smaller circle of fabric, leaving enough space for the needle to reach the shank and sew the button on my coat.

Here’s a close-up look at my refreshed buttons. There was one that wasn’t peeling so I left it as is. It’s the one on the left in the second row. I covered six buttons altogether. (One button was missing when I got the coat so I replaced it with a slighter smaller button. It wasn’t a functional button.)

And here’s a view of me wearing the coat with my newly covered buttons.

It’s nice when you can refresh an old coat and continue to wear it. Have you refreshed an old garment? What did you do to make it wearable?

2 thoughts on “Refreshing an old coat by recovering the buttons”